While not as prolific writing about music since leaving WHRW as Will Hermes, my good friend David Rawson has been making lists of the best songs each year for over 20 years, and I've posted the latest lists of the top 40 albums, top 100 songs and top 10 EPs of 2006.

As usual, many of the entries are unfamiliar to me (read: I never heard of the artist, much less the song or album), but others are better known. In any case there's quite a mix, but usually heavier on the guitars and male vocals than my primary tastes. Besides, I'm mostly exposed to middle-America radio so I have to make an effort to hear anything farther afield than "Hips Don't Lie" or "How to Save a Life"; I do come across the odd-ball cover occassionally, like "Smells Like Teen Spirit" as a lounge song by Ragnar Bjarnason.
Posted by ttChipster at 10:55 PM No comments:

Sonic Boom at the Drive-in

It was a lot more fun than Burger King's free fries day back on Jan. 2, 1998: Yesterday evening, after table tennis club, after some pizza, a friend and his son and me and my son stopped by our local Sonic Drive-in. It was about 10:45 pm but there was an uncrowded party going on. Balloons and banners and festively costumed waitri on roller skates with trays full of fresh free Root Beer Floats (yep, that's "free as in beer"). We'd hardly turned the engines off when a waitress rolled up and offered us each a free float, no strings attached. We enjoyed them at an outdoor table on an evening still warm from a day in the 90's. We chatted and hung out and watched the community college kids cavort. Good times.
Posted by ttChipster at 10:02 AM No comments: 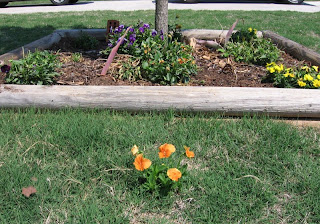 In mid-May, before the rabbits got ravenous (and so thirsty), before the sun was so high and before this was declared our driest Spring ever; one of our pansies "took a walk". It made it about 10 inches before putting down roots where it met it's fate under the blade, I'm afraid, cropped with the grass. But it was pretty and out of place -- just so slightly. See the photo.
Posted by ttChipster at 10:36 PM No comments:

I recently attended a convention at the Gaylord Opryland Resort and Convention Center in Nashville. It's pretty plush, with it's 9 acres of indoor gardens and all; and the convention was swell. But my best off-topic takeaway was Wednesday's lunch salad. The lunch had a southwestern theme from mexican rice with chayote squash to cilantro basted chicken enchiladas. Also of note was their ability to feed well over 1,000 people almost instantly -- they had about 6 double sided buffet lines plus separate areas for soup and dessert. One more aside before we get back to the salad: another neat idea was tented placards placed on the round 10-seater lunch tables indicating a sub-area of conventioneers that should congregate at that table. If you paid attention to them you ended up sitting with other folks that you might not know but that you had something pretty specific in common with; not exactly Dave Winer's "unconference", but a good chance for ad hoc networking.

Remembering the Southwest theme and keeping an open mind, here's the salad, which I found surprisingly pleasing. I'm guessing at the proportions -- I made a batch yesterday and it came out pretty good:

Pretty good, pretty healthy.
Posted by ttChipster at 8:16 AM No comments: