I've mentioned Poker Solitaire, the card game, to a few people lately (mostly when introducing them to my new polyhedral dice solitaire game, Throw Down Seven), but apparently not everyone is familiar with Poker Solitaire so I thought I'd give a run-down of it, the way I like to play.

Also known as Poker Squares, Poker Solitaire is a simple but challenging game with a nice mix of strategy and chance. I learned it from a book on card games, maybe one of the Hoyle books, decades ago. It's not as simple (and mindless) as Clock (click through for someone else's YouTube video that will give you an idea of the version of Clock that I grew up with), but it also has a nice tactile feel like Clock does. This is one reason I prefer to play it with real cards though there are many online and app versions available. The other reason is that none of the digital versions that I've found use my preferred scoring rubric. (I admit we adjusted the one from the original book slightly for more appropriate scoring, e.g. at only 2 points, pairs, were almost meaningless, but I get ahead of myself....)

Poker Solitaire can be played as a win/lose (binary outcome) game, like Clock, or it can be played for score. In Poker Solitaire you try for high score, unlike in Throw Down Seven where lower scores are better. Win/lose Poker Solitaire was featured in the old western TV series Maverick, from the late 1950's and early 1960's. It was in one of the episodes with James Garner, but I don't know which one. (Please let me know if you do!) I'm not sure if they played it as Jacks or Better, or some other level. I find it harder to win at that level than Clock, which you should win about 1 out of 13 tries. I'll sometimes play the win/lose version if I'm only playing one or two rounds, but generally I prefer to play five rounds at a time.

So How Do You Play?

Simple, if you know your poker hands. Take a standard deck of  52 cards, shuffle it. Then draw cards from the top of the deck one at a time, placing them in (an imaginary) 5 x 5 grid. Once placed a card cannot be moved. (Apparently some people allow the location of the 5 x 5 grid to shift, but I call that cheating.) Like this: 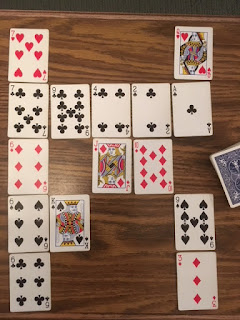 You build 10 poker hands simultaneously, 5 horizontally and 5 vertically. In the picture above you can see that the second row has a flush and the first column has a full house. I'm building toward flushes in three of the other rows and hoping for two pairs, three of a kind, etc. in the other columns. (There's a long shot of a straight in the second column, and the best I can do in the fifth column is a pair at this point. The bottom row is usually trash, though you never know.)

As I said above, I like to play 5 rounds with a goal of scoring a total of 1,000 points, or an average of 200 points per round. That's a challenging mark. Here's the scoring rubric:

(Didn't get at least a pair in a hand? That's zero points, sorry.)

A perfect round is 775 points (4 Royal Flushes and a Straight Flush, with the 4 of a Kinds all lined up in columns but in practice rounds over 300 are very rare while it's easy to botch a round and score under 100.)

I haven't found an app or online version that let's me set the scoring system, but if you know of one I'd like to see it!

This is a good version for two players who don't want to compete against each other, you can alternate who plays a round and try to get to 500 together. The second time the other person will get to play three rounds.

If you don't want to keep score you can try to get a certain level of hand, or better. I usually play this as Jacks or Better, but laying out 10 hands with at least a pair of Jacks or better is tough (for me, at least). No junk row! It's much easier if you play it as Ace High or Better, or Any Pair or Better.

Posted by ttChipster at 11:30 AM No comments: