There's another sort of game that I like to play, one that doesn't involve dice, but where objects are also rolled on a table often covered with green felt: pool, or billiards so as not to be confused with lounging in and around a concrete depression filled with chlorinated water. That can be fun, too, but I'm referring here, in the context of Chipsterzone Games, to parlor pastimes.

I've played a fair bit of 8-ball, and also of Cut-throat over the years. Much of my 8-ball was played a good while back, during college breaks at bars on coin-operated pool tables. I was never particularly good, but perhaps understandably I got a wee better after one drink, let me get out of my head so much, I suppose. My friend, let's call him Tim (since that is his name), got worse at pool with the first drink, but better at Space Invaders, the video game. I got only worse at video games with alcohol. Ah, comraderic competition!

But even at its best my 8-ball wasn't very good. When we moved to Raleigh, NC during high school however the house my parents bought came with a full-size, heavy slate pool table in the basement. My father soon introduced me to an entirely different sort of pool game that they played at the Marine Corps Reserve Center on their lunch breaks (and I'm guessing any other time that things got slow).

They called it simply "Pocket Billiards" and the main object, rather than to shoot balls into the pockets as in most games played on a pool table, was to make "billiards" to score points. That is, players try to make a stroke in which the cue ball strikes two other balls. This is wonderfully difficult, especially at first. It becomes somewhat less difficult as the player understands how, and when, to put various kinds of English, or spin, on the cue ball. Of course English is important in 8-ball or any other game on a pool table, but it's critical in shooting billiards to control where the cue ball goes after contact with another ball, or the rail, and to avoid letting the cue drop into a pocket and scratching a batch of points.

I played a bunch of this game on my dad's table through the rest of high school and college, both alone and with family and friends, but then played it very little for a couple of decades. I've recently resurrected it at my own place of work where we have a pool table in the parlor games area adjacent to our cafeteria. Other games there include table tennis and Foosball. As I introduced it to some of my colleagues there was some confusion over the name and to prevent it being known simply as "Chip's Game", a title I hadn't earned since it's not my invention in the least, I dubbed it Billiards 321 (for reasons that the rules, below, will make obvious).

I recommend it highly for anyone who enjoys playing on a billiards table, but not so much the standard sinking of balls. My chief rival at Billiards 321 here at work has begun this year by creating a spreadsheet to track our competition. He's broken it down into weekly and monthly increments, determined to best me at some interval. His specialty is making "pots" (sinking balls into the pockets), while mine is making the billiards, so we choose differing shots from similar positions and it keeps things lively.

Without further ado, the rules: 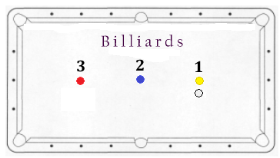 Billiard: hitting two balls with the cue ball during one shot; English (spin) can make all the difference!

Break:
A) Set up the 3, 2 and 1 balls in their home positions as shown: 3 and 1 on the spots, 2 ball in center
B) Cue ball to one side or the other of the 1 ball, no more than a ball's width away.
C) Cue ball must hit 2 rails, including the far rail, before touching any balls, then must hit 2 balls (make a billiard) to be a good break.
D) Players take turns attempting to break until either someone makes a billiard or each player has made an attempt.
E) If the last player fails to make a good break then the first player begins regular play where the balls ended.

Play:
A) Must make a billiard to open a turn.
B) Subsequent shots can either sink a ball or make a billiard to continue a turn.
C) Sunk balls are returned to their home position for the next shot (or as close as possible without touching any other balls)
D) If a player scratches during a turn all points accumulated on that turn are lost (A scratch in this game is when the cue ball goes into a pocket, or off the table, or the shooter fouls by hitting other balls than the cue ball with stick, hand, etc.)
E) After a scratch the next player must start from within a ball's width away from the one ball's home position and must hit the far rail prior to touching any other ball.

Scoring:
A) A billiard is 2 points (hitting all 3 balls in one shot is 5 points)
B) Sinking a ball scores the number of points on the ball: 3 ball is 3 points, 2 ball is 2 points, 1 ball is 1 point
C) Both billiards and ball points can be scored in the same shot
a. It is not required that the billiard completes before the ball falls in the pocket
b. Example: a player hits both the 1 ball and 3 ball with the cue and pots both balls; that is  2 + 1 + 3 = 6 points for that shot.
D) Players accumulate their points verbally during a turn and then record them at the end of their turn, this way only unscratched points are retained.

E) A standard game is to 50 points, it is not required to hit 50 exactly 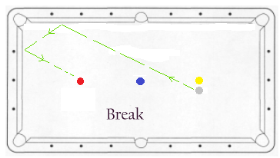 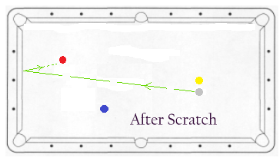 Advanced: This is a billiards game, if some players tend to score too many points by shooting balls then the “billiards rule” can be added, either at the beginning of a game, or during a game if so agreed prior to start. From the point the rule is put in place no more than 2 ball shots in a row without billiards are allowed. If a player shoots 3 ball-only shots then they can keep all points but their turn ends. The sunk ball(s) are re-tabled and the next player shoots as after a miss. (The other players should verbally note when 2 ball shots have been completed without a billiard so everyone is aware that the next shot must include a billiard for the turn to continue.)

Higher Scoring Variant: When a ball is sunk replace it with the next lowest ball that hasn’t been in play, always spot it on the farthest open home spot from the cue ball (if equidistant then farthest from the other balls). Balls continue to score their face value, wrap back to the lowest ball after the 15 has been used (e.g. back to the 1 ball). Billiards score 5, hitting all 3 balls scores 8. Play to a higher number, e.g. 200.

Posted by ttChipster at 5:00 PM